Decreasing support for immunity passports amongst Australians, but this depends on age

New research conducted by the Complex Human Data Hub suggests that support for the Australian Government introducing immunity passports in response to the COVID-19 pandemic is decreasing. In our survey conducted 7th May 2020, 61% of Australians showed little to no support for the introduction of immunity passports once they have considered the implications of such a policy, compared to 54.5% on 15th April 2020.

An immunity passport identifies that you have previously recovered from COVID-19 and that you are unlikely to further spread SARS-CoV-2 — the virus responsible for causing COVID-19 in humans — among the community. Possessing an immunity passport would allow you to return to normal activities with exemption from government social distancing and lockdown policies.

Although immunity passports are yet to be proposed by the Australian Government, the concept has gained traction in Germany, Chile, Italy, China, Spain, and the UK. These countries have invested heavily in antibody testing and may intend to kick-start their economies by allowing potentially immune individuals to return to work as soon as possible; but at what cost?

The introduction of immunity passports may create different ‘classes’ of citizens with different rights. Immunity may vary with biology, affecting some communities more than others, and may incentivize people to deliberately self-infect to secure greater freedoms. Given these considerations, to what degree does the public support this policy?

In our most recent investigation (read about our previous investigation here), we asked a representative sample of 500 Australian’s about their attitudes to immunity passports as part of a Government response to COVID-19. Participants responded twice: once immediately after learning of the hypothetical policy, and once after being asked questions that prompted them to consider the effects of such a policy on the Australian public.

When first asked about their support for immunity passports, a majority (52%) of people ‘moderately’ to ‘fully’ supported their introduction. However, after considering the broader effects of immunity passports, support dropped to 39%. These results display a decrease from our previous investigation one month prior, where support was 61% and 46%, respectively. 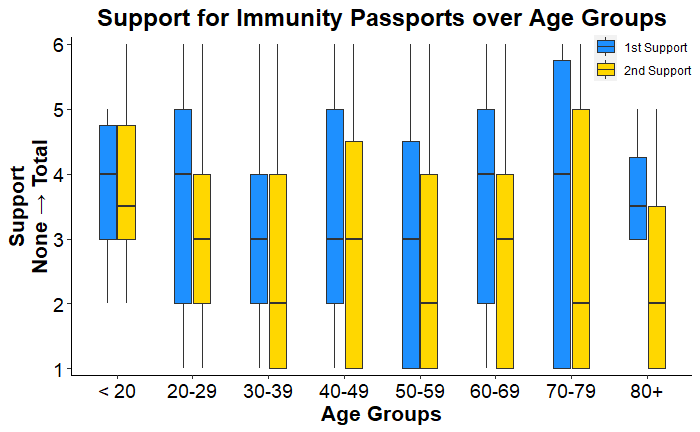 Figure 1. Support for immunity passports across age groups after reading the hypothetical policy (1st Support), and after having answer questions about the impact of the policy on Australia (2nd Support).

One key concern with introducing immunity passports is that people may choose to deliberately self-infect with COVID-19 to increase their freedoms and return to their normal activities. Our results, however, indicate that this scenario is very unlikely, with 69% of participants indicating they would ‘not at all’ consider this as an option. This attitude is conditional on age, as younger Australians between the ages of 20–39 showed slightly more inclination to self infect than their older counterparts.

Australia’s attitudes towards immunity passports may change over time as lockdown laws are lessened and we re-enter the workforce. The desire to know who may yet contract and spread COVID-19 may increase, pressuring the Government to act. The current results form part of an ongoing investigation into the Public’s attitudes towards COVID-19 policymaking. More results will be announced by the Complex Human Data Hub as they happen. You can keep up to date with the latest results from Australia and around the world by following this link.