Chinese characters have been getting more complex

New findings shed new light on the history of Chinese script – demonstrating its increasing complexity – and also provide important insights into the dynamics of human communication. 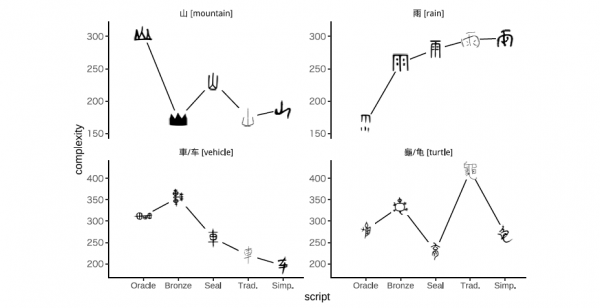 The Chinese writing system has become increasingly complex over the course of its 3000-year history, according to new research by an international team of scholars based at the University of Melbourne, the University of New England and Mohammed VI Polytechnic University, Morocco.

This finding challenges an opposing centuries-old view that Chinese signs have simplified over time.

“We’ve all seen those historical charts that show Chinese characters go from pictures of things to very basic sets of strokes” says lead author Simon J Han, who first began working on the problem as an undergraduate at the University of Melbourne. “The reality is much more interesting.”

Using sophisticated computational methods, the team measured the visual complexity of more than 750,000 Chinese characters across five historical phases, from 1600 BC to the present day. What they found is that the overall trend is for the signs to become increasingly complex with time.

“Even when the Chinese government enforced a simpler version of the script in 1956 it still didn’t alter the overall story of increasing complexity,” says Piers Kelly, a linguistic anthropologist from the University of New England who studies the evolution of writing.

The exact opposite effect is found in many other writing systems of the world. The first inventors of writing systems were often inspired by detailed pictures of real things, but new generations soon start abbreviating their letter shapes to simpler forms.

For the sake of efficiency, written signs tend to become simpler and more systematic over time.

“Like other writing systems of the world, it looks like there is a kind of trade-off between the need for simplicity and the need to distinguish between each sign” agrees Charles Kemp, a specialist in computational modelling here at MSPS.

“But we think Chinese writing might be a special case. Unlike most other writing systems, the number of Chinese characters has increased dramatically over the millennia. So, in order to tell each sign apart perhaps it became necessary to add more contrasting details.”

The results shed new light on the history of the Chinese script – but they also provide important insights into the dynamics of human communication.

In order to work most efficiently, our symbolic systems require a careful balance between simplicity and complexity. As Albert Einstein is reported to have remarked: “Everything should be made as simple as possible, but not simpler”.

Read the paper on Open Mind